Socio-economic and environmental factors play a significant role in a person’s ability to achieve health and wellness. The following section highlights the social determinants of health impacting Angelenos. 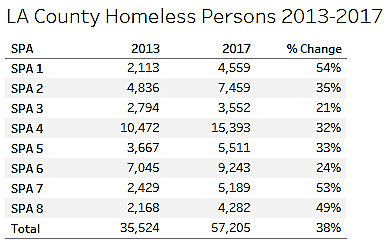 The number of community clinic patients that lived below 100% federal poverty level increased in SPAs 1, 3, 5, and 7.

Through a variety of measures of health, Los Angeles County and the SPAs have wide variation in health indicators.  Many of the indicators are directly impacted by economic and social conditions, and can be mitigated by access to health care. With the exception of a few SPAs, most areas are impacted by high poverty rates, high rates low educational attainment, and high rates of the population who spend more than 30% of income for housing.  These indicators show there are significant proportions of the County’s populations that are living in extreme economic hardship.

These are key findings from CCALAC’s 2018 Network Adequacy Report.

This project was funded by L.A. Care Health Plan to benefit low-income and uninsured residents of Los Angeles County.

Enter your username or email address below to reset your password